Charterhouse is one of the great historic schools of England and among the most beautiful. Drawing deeply on the heritage of the past, within a framework of sensible discipline based on sound Christian values, the School strives to stimulate independent inquiry and intellectual curiosity, to match physical fitness with a love of the arts, and to foster a secure sense of individuality to be placed at the service of society.

The founder, Thomas Sutton, held high public office and through shrewd investment became one of the wealthiest men in Jacobean England.

In 1611, the year of his death, Sutton made provision for the establishment of a hospital for pensioners and a school for boys. Buildings near Smithfield in London which had once housed a Carthusian monastery, established in the fourteenth century, were purchased, and Sutton was buried in the chapel. Pupils have always been referred to as Carthusians.

A few years later, the Headmaster, Robert Brooke, a royalist, was dismissed by Cromwell. The masters used to meet in his study and the Charterhouse common room is still known today as Brooke Hall. Brooke's courageous independence of mind is a quality nurtured in their pupils by the present teaching staff who are known collectively as members of Brooke Hall.

In response to the recommendations of the Public Schools Commission of 1864, and with the support of the Headmaster, William Haig Brown, the Governors eventually agreed to move the School from London. They purchased 68 and a half acres of the Deanery Farm Estate, just outside Godalming, having sold the School's original site to Merchant Taylors'. The School arrived in Godalming in June 1872, with 120 boys in three boarding houses: Saunderites (Headmaster's House), Verites and Gownboys. An increase in pupil numbers led to further houses being built at the expense of those masters whose names they now bear. By 1921, all eight additional houses had become the property of the Governing Body. Further purchases of land to the north and west increased the size of the School's grounds to around 250 acres.

The magnificent chapel, designed by Sir Giles Gilbert Scott, was consecrated in 1927 as a memorial to nearly 700 Carthusians who died in the Great War. It is the largest war memorial in England. Some 350 names have been added to commemorate those who died in the Second World War and other conflicts of the twentieth century. Close to the chapel stands a bright red telephone box, another of Scott's distinctive designs.

History of Charterhouse in 100 Objects

Neil MacGregor’s History of the World in 100 Objects, based on artefacts in the British Museum and broadcast on BBC Radio 4 as a series of 15 minute talks, captured the imagination of many people. The History of Charterhouse in 100 Objects is based on a similar concept, exploring the artefacts remaining in our Museum store. Photographs and details of objects 1-52 are available below. New objects will be added regularly to the series and details of the latest additions will be available the news section of the School website.

HISTORY OF CHARTERHOUSE IN 100 OBJECTS| PDF

The brochure outlining the Heritage Tour of Charterhouse can be viewed below:

Please click the link below to view an online Roll of Honour to 695 Old Carthusians and teachers who perished in the First World War.

The ‘Charterhouse Registers’, which give biographical details of scholars (boys on the foundation) and of all known pupils from 1769 to 1975 have been published, and are now available online. The Carthusian magazine 1872-2012, School photographs 1868-1939, and scrapbooks of Charterhouse life 1863-1903, can also be viewed online. Click here to request a username and password for the digitised Archive. 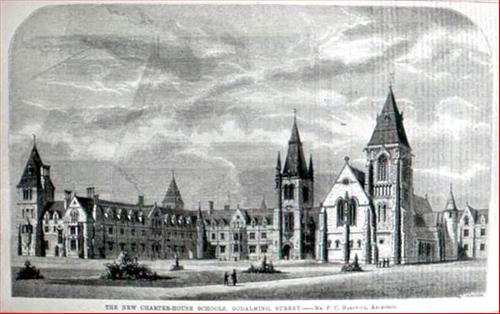 The Charterhouse School Archive (in Godalming) contains the records of the School's activities and administration since 1872. Some registers and printed annual form lists for earlier years in the nineteenth century were transferred when the school moved from London, and a few papers, letters and albums relating to the period before the move have been given by former masters and pupils. Otherwise all earlier records of Thomas Sutton's 1611 foundation, including scholars, are held in the London Metropolitan Archive.

The Charterhouse Archive contains the official records of the school, but also a wide range of information and photographs covering every aspect of Carthusian life, and collections relating to the lives of Old Carthusians as diverse as Thackeray, Baden Powell, Beerbohm, Vaughan Williams and Ronald Millar. The archive is available to the school community as an educational and administrative resource, and we also welcome research enquiries from the general public.

For further information or to arrange a visit, please contact The Archivist, Catherine Smith, +44 (0) 1483 291604, archive@charterhouse.org.uk.