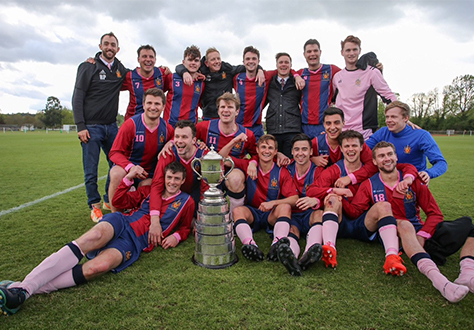 A review by Matt Bailey, Chairman of the OCFC

There were a few who questioned the logic of entering three Cup competitions as well as focusing on winning back the Arthurian Premier League title.  Looking at it now, what a decision. Bold and ambitious.

The unprecedented ‘Quadruple’ was achieved on Saturday with the 1st XI winning the Arthur Dunn Cup.  Our 3rd Dunn win in a row, 10th in the last 14 seasons and 30th in our history.  An incredible consistency of performance and a sign of the true dominance the Club has had, and a warning that there is a new crop of players emerging to deliver yet more years of excellence over the coming years.

As for the game itself, much of the build-up was around how fired up the Etonians would be. The key to finals is ensuring focus and staying calm, as demonstrated by Jamie Cameron and Tom Gilbey below. 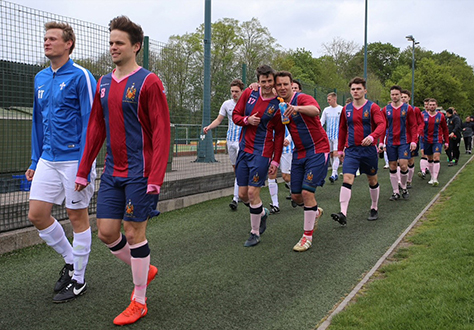 That calmness paid off with an early strike from Fenton, punching home after some magical work from the excellent Walford down the left.  The OCs had the weight of chances for the remainder of the half, only allowing the Etonians possession in their own half, without any real threat to the OC goal.

Half time caused some confusion as the match officials failed to ring the bell to summon the OCs from their dressing room for the second half, leaving the OEs out in the cold.  The 20 minute break clearly worked, as the XI piled on the pressure, controlled the half and doubled their lead with a 25 yard pile-driver from Tim Downes, who continues to impress in the biggest of games.

From then there were murmurings of an Etonian comeback, with a spell of pressure and the first signs of defensive uncertainty, but the OEs soon ran out of puff and the OCs pushed for a third.  After several clear chances and a number of more speculative efforts, a chance fell to the dead-eyed Fenton, one-on-one with the keeper, there was only one result, the ball nestled again in the back of the Etonian net, Fenton’s second and the Cup secured.

Captain Beddows again showed great technique in hoisting the trophy, opting for an energetic lift and a lunging motion towards the crowd on this occasion, and then settling in for a tremendous team photo

Thank you to all the OCs and OC supporters in the crowd on Saturday, again it was incredible to catch up with a very broad range of generations, all who share in the enjoyment of feeling part of our great and welcoming Club.

With just a few more league games for the 1s and 2s left to wrap up we are almost at the end of the season.  It has been magnificent across every team and a more formal end of season wrap up will follow in due course.