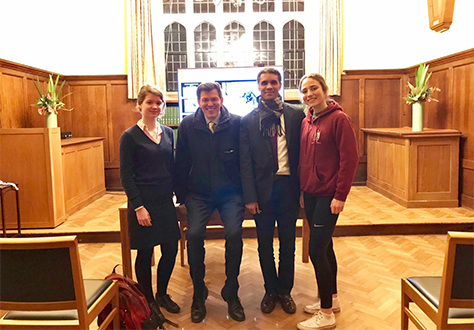 Dr Montgomery, aside from working as a private consultant, holds the world record for longest time spent playing the piano underwater (128 hours) and often partakes in ultra-marathons. With this, he has spent over 22 years within the climate change community. Dr Montgomery deals with patients battling life threatening illnesses who are extremely close to death, with diseases influenced very heavily by climate change. He has published over 450 studies for scientific journals and has pioneered research into a ‘fitness gene’ that will enable an individual to see their capacity for improvement in both endurance and strength.

Initially, Dr Montgomery points to a disproportionate amount of money used per capita in comparison to general population between two periods: the present day and the 1800’s. Despite an increase in the general standard of living throughout this period, Dr Montgomery remarks that the world is unable to facilitate the path developed nations are on in their growth and that modern capitalism should be disassembled and rebuilt from the ground up.

Alongside this significant monetary advancement, Dr Montgomery reflects on the catastrophic increase in consumption of fish (being 22.5 kg per capita per year). In the spirit of our environment impact, he points to the period post 1950, where there has been a significant drop in the variety of species in the ecosystem due to, in part, by the direct damage we are causing to our oceans, in which 90% of the coral reefs will be gone within 40 years, thus taking out the fish that thrive there. Furthermore, goes on to state that 75 McDonald’s hamburgers are sold each second. With this, beef requires 15,000 litres of water per kilo of meat; to equate the two, the volume of water needed by McDonald's is that of the ten mid-African countries...

Dr Montgomery works closely with countries such as Iran, who are currently tackling the issue of feeding their population. With 60% of its irrigation from unsustainable under-ground sources, sources which will take decades to naturally refill. For perspective, Dr Montgomery shows the room several lakes with beached cargo ships, which were in 50ft of water just a few years prior. With all the damages that we are doing to the world, we are losing topsoil at significant rates, meaning that fertile soil will be impossible to come by.

Similarly, we are currently using the land area of the whole of the African continent for animal grazing. With the lack of land, we are moving to forests, cutting them down at 130,000,000,000,000 meters squared per year (the equivalent of 20 football pitches a second). With this, the number of vertebrates are at all time lows and 72% of all birds on the planet being farmed poultry. ‘We are in an era of mass extinction’ says Dr Montgomery, ‘with over 8 species going extinct per hour’.

On top of these issues, there are a multitude of issues accentuating the climate change. To quantify the exponential growth of consumption in the world, 4 billion lightbulbs are sold per year, up from just a a mere handful a century ago. 1.4 billion cars reside on planet Earth. Last year we burned 245,031 kilos of coal.

Frighteningly, 1/5 th of these emissions will be heating the atmosphere in 100,000 years time. Moreover, we are using the equivalent of 5 nuclear bombs used in Hiroshima per second to power the world. Climate change is now the greatest threat to human health.

Why is it bad? More heat will boost the rate at which bacteria grows, there will be more oceanic and river algae blooms and far more aeroallegens that cause asthma. Though, those are minor compared to other illnesses that will thrive, such as vector-borne diseases that are carried by, for example, mosquitos and snails. In these conditions, dengue infection (a virus prominent in China) has increased by 10% every decade, killing millions in the process.

Moreover, food security has dropped as instability in weather conditions has caused mass destruction and an inability to grow crops at a consistent rate. Labour productivity has dropped 5.3% in industry exposed to weather conditions. Interestingly, the climate changed that caused dry conditions in Kazakhstan, a large exporter of wheat, became net importer, causing prices to increase from $150/tonne to $350/tonne.

Within our lifetimes, Dr Montgomery believes that we will be exposed to conditions 4-7 degrees C greater than what we have now, stating that we are beyond any point of environmental return. His desolate view was pessimistic to say the least. After being questioned on whether we should just give up, Dr Montgomery alluded to a patient giving in to their health problems, all of which end up dying promptly after. He calls for the younger, ‘smarter’, ‘vegan’ generation to do the job that his generation was unable to do.