On Sunday 10 March, the Charterhouse String Trio of Benedict Wong, Ashley Chan and Henry Le Ferber Robertson travelled to Queen’s College Harley Street, London, for the National Finals of the Pro Corda Chamber Music Festival, competing in the U19 category.

The judges were extremely impressed by their playing, understanding of the music and superb ensemble skills and, despite tough competition from an excellent ensemble of nine trumpets (!), the Charterhouse String Trio came away with first prize!

This is excellent news for the trio and for the School, who have now come away with first prize in 2016, 2017, 2018 and 2019. Henry Le Feber Robertson can even lay claim to being a member of every winning ensemble! 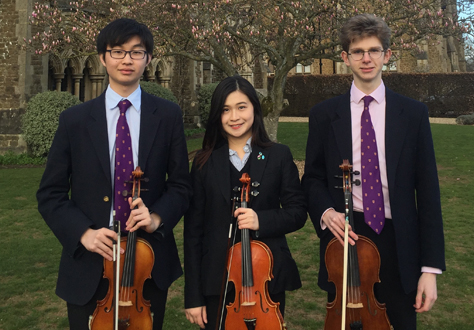 The Pro Corda Trust is a music and educational charity established in 1969 founded by Pamela Spofforth MBE and Elizabeth Hewlins MBE and its purpose is “to provide for and conduct the education of young persons and others in the whole art, philosophy and theory of music, particularly chamber music”. Pro Corda is the largest music organisation of its kind and is recognised as the UK’s centre of excellence for ensemble training.

Before half term, they performed the first and third movements of Zoltan Kodaly’s Serenade op.12, comfortably progressing through the first round, giving a performance that oozed musicality and maturity. The adjudicator described their playing as ‘just about perfect’. On Wednesday last week, the trio returned for the semi-final, playing the Kodaly once more. Again, the (different) adjudicator was most impressed by their playing and worked with them at length to improve upon an already excellent interpretation, coaching them as though they were a professional ensemble.

Come Finals Day and entering into the U19 category, the trio once again performed the outer movements of Zoltan Kodaly’s op.12 Serenade. The three pupils have worked incredibly hard over the last few weeks, continually improving and evolving their interpretation of this work, all under the expert guidance of Rafael Bolivar, Head of Strings at Charterhouse.

A winners' concert will be held in London in the near future, details will follow on the Pro Corda website.

Many congratulations go to the three pupils and to all those that helped and coached them along the way. A wonderful achievement.