Object 50: A History of Charterhouse in 100 Objects

Neil MacGregor’s History of the World in 100 Objects, based on artefacts in the British Museum and broadcast on BBC Radio 4 as a series of 15 minute talks, captured the imagination of many people. The History of Charterhouse in 100 Objects is based on a similar concept, exploring the artefacts remaining in our Museum store. Object 50 has now been added to the series.

This charming illustrated love letter from an amorous young pupil is in York Castle Museum’s collection of valentine cards. It has so much to tell us about school life at Charterhouse in London that we have included it in the ‘100 Objects’ series, even though the original item is not in the School’s possession; York Castle Museum have very kindly provided high-resolution copies so that you can enjoy it. 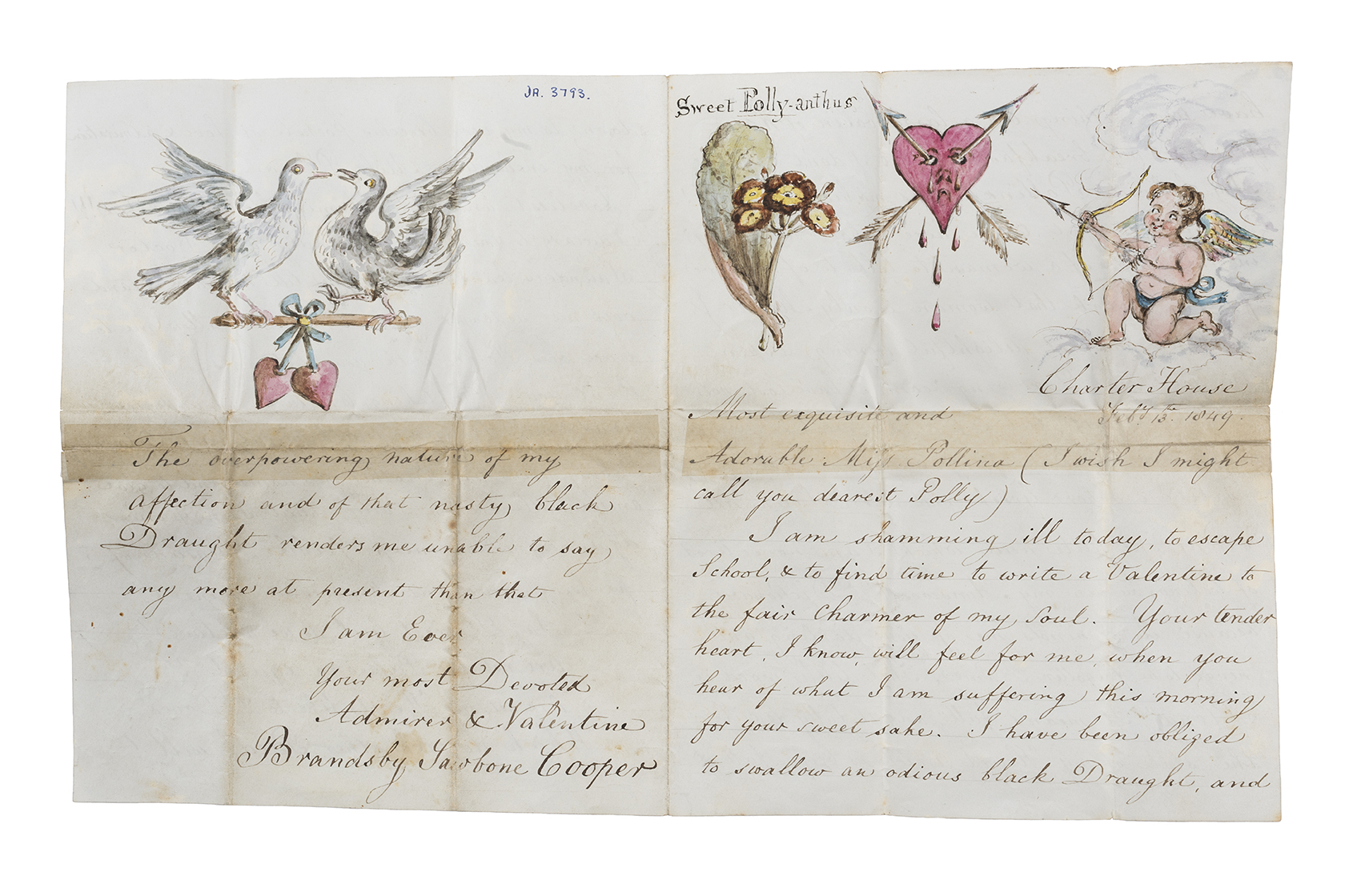 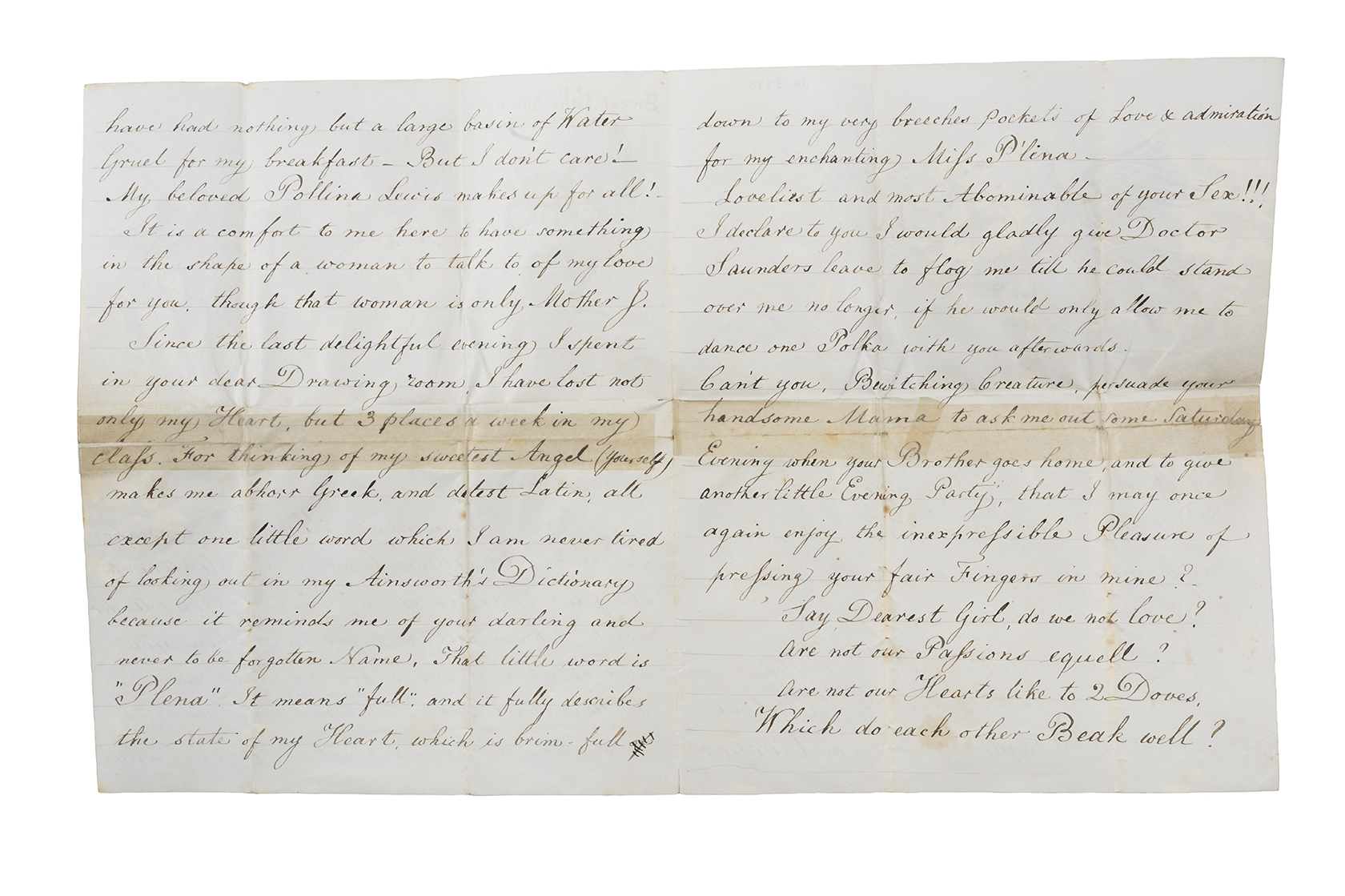 I am shamming ill today, to escape School, & to find time to write a Valentine to the fair charmer of my soul. Your tender heart, I know, will feel for me when you hear of what I am suffering this morning for your sweet sake. I have been obliged to swallow an odious black Draught, and have had nothing but a large basin of Water Gruel for my breakfast – But I don’t care! My beloved Pollina Lewis makes up for all! It is a comfort to me here to have something in the shape of a woman to talk to of my love for you, though that woman is only Mother J.

Since the last delightful evening I spent in your dear Drawing room I have lost not only my Heart, but 3 places a week in my class. For thinking of my sweetest Angel (yourself) makes me abhor Greek and detest Latin, all except one little word, which I am never tired of looking out in my Ainsworth’s Dictionary because it reminds me of your darling and never to be forgotten Name. That little word is “Plena”. It means “full” and it fully describes the state of my Heart, which is brim-full down to my very breeches pockets of love and admiration for my enchanting Miss P’lina.

Loveliest and most Abominable of your Sex!!! I declare to you I would gladly give Doctor Saunders leave to flog me till he could stand over me no longer, if he would only allow me to dance one Polka with you afterwards.

Can’t you, Bewitching Creature, persuade your handsome Mama to ask me out some Saturday Evening when your Brother goes home, and to give another little Evening Party, that I may once again enjoy the inexpressible Pleasure of pressing your fair Fingers in mine?

Say Dearest Girl, do we not love?
Are not our Passions equall?
Are not our Hearts like to 2 Doves,
Which do each other Beak well?

I am Ever
Your most Devoted
Admirer & Valentine

“Bransby Sawbone Cooper”, the author of the letter, was Lovick Henry Cooper, born 21 January 1832, the third son of a surgeon, Bransby Blake Cooper FRS. Lovick was at Eton for just a couple of months (June to August 1842), but he moved to Charterhouse in June 1843, joining Saunderites boarding House. We do not have much detail about Lovick’s time at Charterhouse, other than that he played for the School Cricket XI team. In his final exams in the summer of 1849 he is listed as bottom of the Fifth Form, perhaps because he was distracted by love!

Lovick's illustrations are quite accomplished - his drawing of a Polyanthus flower (similar to a primrose) is instantly recognisable, so perhaps his parents had paid extra for art lessons with the Charterhouse drawing master, William Robertson.

Cricketers on Upper Green, London Charterhouse, with the Schoolroom in the background (centre).

‘Pollina’ was Paulina Lewis (born 1835), the daughter of George Lewis, who Secretary to the Master of the Horse in the Royal Household. Paulina’s brother, William Lewis, was a Gownboy scholar at Charterhouse between June 1844 and May 1849. We will never know whether Polly returned the affection of her valentine, Lovick Henry Cooper. Poor Lovick joined the British army in India after leaving Charterhouse and was commissioned as a 2nd Lieutenant in the 1st European Fusiliers Regiment. He died, aged only nineteen, at Meerut on 22nd November 1851. Polly eventually married in 1863 to a widowed rector who was nineteen years older than her.

Lovick faked illness to escape school and write to Polly. He would have been sent to the School infirmary to see the medical officer, who was later described by Gerald Davies OC: “Dr John Miles, a man whose knowledge of human nature perhaps was in advance of his medical science, must at least claim the praise of having kept us healthy by simple means. He had, in his repertoire, two main remedies. If he suspected a boy of wishing to sham he gave him black draught; if he thought he was really unwell he gave him brown mixture. The would-be shammer feared the black, the ailing boy feared the brown, and so on the whole the sick list was kept fairly free”.

The infirmary was presided over by the Gownboys Matron, Mrs Elizabeth Jeffkins, universally known as “Mother J”. She held the post for over thirty years and was adored by all the boys. After her death at Charterhouse in 1856 the Old Carthusians erected a memorial to her in the Chapel at the London Charterhouse.

“Carthusians of Dr Saunders' day were full of good stories of his doings and sayings, marked all by a certain quaint humour which was among the valuable assets of his personality – witness, for example, his offer to two boys who were anxious to fight, that though he could not oblige them in that respect, he would flog each of them as long as the other desired, and it would come to the same in the end. Carthusians who had been in his Sixth were fond of telling how in his later days he would seem to be asleep, the form keeping up a drowsy humming for fear of arousing him, till he would suddenly wake up, pounce on some boy, set him on to construe, and in ten minutes teach more than many a man could do in a day”. Gerald Davies (G1864, BH1873-1905)