Object 48: A History of Charterhouse in 100 Objects

Neil MacGregor’s History of the World in 100 Objects, based on artefacts in the British Museum and broadcast on BBC Radio 4 as a series of 15 minute talks, captured the imagination of many people. The History of Charterhouse in 100 Objects is based on a similar concept, exploring the artefacts remaining in our Museum store. Object 48 has now been added to the series.

This beautifully decorated box is a traditional foot-warmer from the Hindeloope region of Friesland, on the northern coast of the Netherlands. The design features cherubs and flowers painted in red, gold, blue and green. The front panel of the wooden box slides up and an earthenware dish filled with hot coals can be placed inside. It has a brass carrying-handle and would have been put on the floor in a horse-drawn carriage, or carried to church to keep the owner’s toes warm.  The carved lattice-work and floral paintings are typical of Hindeloopen design. There are three similar eighteenth century examples in Haslemere Museum. 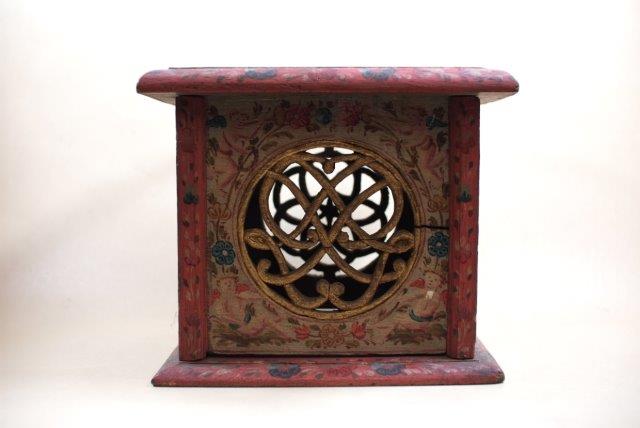 The box was collected by Gerald Davies (G1864, BH 1873-1905), founder of the Charterhouse Museum and namesake of Daviesites. It comes from the same part of Holland as No.27 in the 100 Objects series (an ice sledge from Friesland). Gerald Davies was a patron of the arts and crafts movement and was particularly interested in traditional European craft designs. This interest was sparked by a fishing trip to Norway in 1885 when he collected some of the most “extraordinarily beautiful designs that he had ever come across anywhere”. He started to buy examples of ‘European Peasant Art’, spending happy summer holidays travelling across Europe and selecting beautifully designed household objects made by rural workers for their own use rather than to sell commercially or, as Davies put it, “for love and not for money”. He saw these craft skills as representing a purer way of life, which he feared was dying out, and he hoped that his collection would help to preserve it. Gerald Davies bequeathed much of this collection to Haslemere Museum, but some objects remained at Charterhouse and we have lovely decorated items from Holland, Sweden, Norway and Iceland, as well as a Surrey rural life collection.