Charterhouse is proud to be a partner of Mellon Educate, a remarkable charity improving schools and lives in South Africa’s poorest communities. Having previously raised £20,000 for Mellon, Charterhouse now runs an annual ‘Student Blitz’ in Khayelitsha.

October 2019 saw the second Student Blitz take place, involving 17 pupils and three teachers. They worked with three schools in the Khayelitsha township, with a particular focus on paired and small-group literacy work, an important experience where classes often have 40 or 50 children. Carthusians also led sports and science lessons, and worked alongside Mellon’s staff and interns to create exciting and educational opportunities for the children at Ummangaliso, Sobambisana and Usazaso schools. 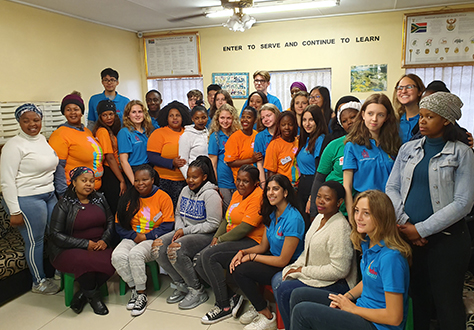 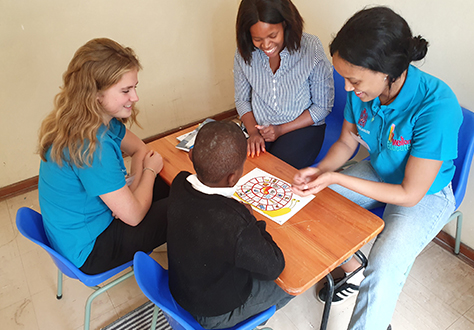 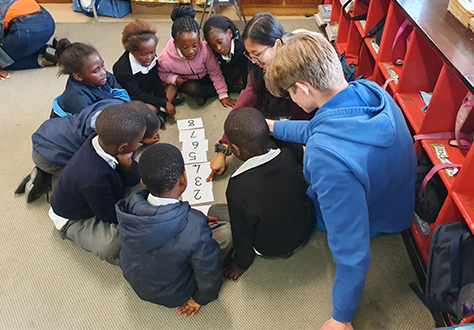 Alex Cardozo and Christie Yan, two of the pupils selected for this year’s Blitz, have written below about their experiences in South Africa.

Our first day, Monday, was a day of mixed emotions; the sight of thousands of corrugated iron homes, the size of rooms was deeply uncomfortable. However, stepping into Umangaliso primary school, we were greeted with the immense enthusiasm and joy of hundreds of students. After our greeting, which contained a dancing procession, the singing of the South African national anthem, as well as the booming voice of Umangaliso’s headmaster, we were shown around the school and introduced to the interns who we would be working with for the week. We were shown the literacy exercises we would be teaching the kids as well as the new literacy hub that had been redecorated thanks to the fundraising of Lydia Fernandez, who left Charterhouse last year after raising £2,000 for this specific Mellon project.

Soon the students arrived and the feeling of discomfort that had been so strong upon our arrival disappeared as we were immersed in the teaching. Not long passed before the obvious became apparent; this was a school. What had begun as an emotional day became routine as the familiarities of school surrounded us. We were halfway around the world interacting with people who’d never experienced our culture, just as we hadn’t experienced theirs, yet there was a strange sense of familiarity. Philosophers, politicians and authors often talk of a common humanity. We easily dismiss this as liberal jargon however there was definitely a commonness between this primary school on the outskirts of Cape Town and any school found in the UK. We were all singing and dancing, playing sport, and reading books, the same as any other primary school students. There was no division, no patronising paternalism (something I thought would be uncomfortably present throughout the trip); we were working alongside the interns to teach the students literacy and movement. After a first day of a mixture of emotions, we were all ready to sleep. 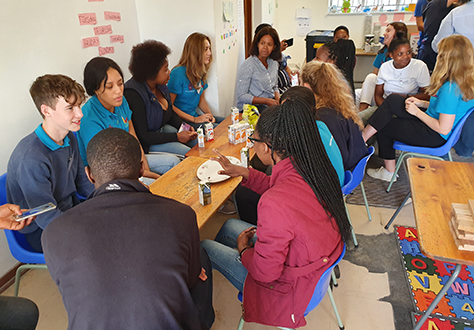 We were far more at ease for the following days as our surroundings became more familiar. Visiting Usasazo High School on Wednesday and Thursday, we were teaching students a few years younger than us which only proved to enhance the feeling of familiarity. Over the course of our two days at Usasazo High School we were able to teach the students about Gravity and the Solar System using songs, posters and an interactive lesson. Throughout our week, we were openly welcomed and met with by immense enthusiasm from the students. Our week of teaching was concluded with sad goodbyes and letters from students at the primary schools in which they expressed their gratitude and dreams for the future. One of the main themes I felt during the week was of hope. Along the walls of Umangaliso and Sobambisano primary schools were quotes and thoughts inspiring the students to strive for fulfilling, enjoyable and better lives. This is something that I feel is often missing in our world. We can easily become wrapped up in our current situation, getting to the next stage of life, getting good marks. These are, of course, great and normal things to want but we must also remember that life is also about enjoyment. What is the purpose of life without enjoyment? Throughout our week the students were enthused, they were constantly enjoying themselves and having fun. This clearly has much to do with them being children, but it is still a reminder that we need to break out of our bubbles, out of our spheres of relativity, to grasp the broader picture of life.

Our week in South Africa was inspiring and heart-warming. We were able to show the children that we, like them, share education and its empowering effect. It was a privilege to be involved in an amazing week and I can truly say that we learnt as much from them as they did from us. I would also like to add that the work that the interns do and the work that the employers of Mellon Educate do is remarkable and extraordinary. They have such a positive impact on so many people and are able to make real change to real lives.

After an 11-hour flight and another 2-hour connecting flight from Johannesburg, it was safe to say everyone was completely shattered from the constant turbulence. However, our tiredness was nothing in comparison with the excitement we had to meet all the pupils the very next day. We were greeted by members of the Mellon Educate team, the charity we would be working with closely throughout the week and began planning our lessons with the students. After finishing a lovely traditional Braai meal, every Carthusian and teacher was out like a light by 9:30pm.

Driving through Khayelitsha for the first time was an uncomfortable moment for everyone on the bus. The sight of thousands of homes tightly packed together in a tiny district, decorated with colourful steel scraps was one that gripped us by shock. As we progressed through Khayelitsha towards Ummangaliso and Sobambisana we realized this sense of discomfort was not because it was a foreign sight, but because it was so real and that there were hundreds of thousands of people dependent on these steel walls to keep them warm. The moment we stepped into Ummangaliso, however, was where we were greeted with unrivalled degrees of enthusiasm and respect. The students and teachers had prepared a whole dance and cheer routine, accompanied by drums and music to welcome us to what would turn out to be a mutually rewarding week. Followed by a warm speech and joyful singing by Ummangaliso, we quickly gathered our emotions and began working closely with the interns to understand their teaching system in their literary hubs that had been redecorated thanks to the efforts of Lydia Fernandez (Old Carthusian). Throughout the first day, we focused on grasping their teaching system and familiarized ourselves with the material that the Grade 1 and Grade 2 students were to be taught. We also planned physical activity lessons for Grade 5 students to encourage movement and coordination.

Depite initial nerves on the first day, we quickly immersed ourselves into the daily routines of the school and began teaching the students for the rest of the week. But our interactions were not only limited to students who received additional tutoring and a multiple grade 5 classes. We were greeted with countless smiles and hi-fives from all pupils. We were also invited to put on puppet shows for Grade 3 students, as well as joining in on an afterschool activity involving Jazz Art, where 17 Carthusians were completely outshone by the coordination of the students at Sobambisana. We also visited a nearby high school, where we delivered interactive science lessons on the concepts of gravity and orbits, which were all related to their upcoming exams. The lessons proved to be helpful, as they were all able to confidently answer our questions and complete our review exercises. Their enthusiasm and welcome was something that surprised many of us: the sheer enthusiasm and excitement they had for 20 complete strangers that had come for a week was simply unparalleled.

The next few days did prove to be an exhausting experience for many: waking up at 6am during half-term isn’t exactly the dream holiday that Carthusians desire. Yet it was overwhelmingly rewarding. The appreciation of even the most miniscule of events from the students reminded us how truly privileged we are. The casual conversations we had with the teachers and the interns where we learnt that their roles extended beyond merely teaching and learning of the culture of violence within these townships was not only harrowing, but also extremely eye-opening to just understand how fortunate we all are.

Outside of Khayelitsha, we were able to visit the infamous Table Mountain (despite the heavy winds shutting down the cable car system just as we arrived), as well as visiting a cheetah sanctuary where we were provided with the opportunity to pet a cheetah, despite the heavy rain. We had multiple group meals throughout the week, including a fantastic dinner at Lily’s and a meal at a traditional African restaurant where we were treated to traditional performances. We also had some free time to relax and enjoy the V&A waterfront. The most memorable experience of all, and perhaps the most harrowing, was our visit to Robben Island, where Nelson Mandela was imprisoned for 18 years. Guided by a former prisoner of Robben Island, we explored the prison, accompanied by harrowing stories and descriptions of the treatment that prisoners of colour received during their time.

Ultimately, this week was filled with new experiences for every Carthusian on the trip, and we learnt invaluable lessons from everyone we met, many of whom may never know the impact that they have had on us. Our week in South Africa filled us with constant reflection on how we can improve the experiences and lessons for the students, and our constant criticisms of our own planning was something that allowed for us to help to the best of our abilities. This trip was nothing short of extraordinary, and we would like to express our gratitude to Mr Ben Cahill-Nicholls, Miss Martina Boggian and Miss Ana Presencio for bringing us so far from Charterhouse to educate. 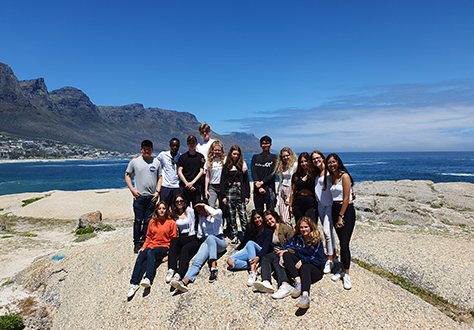