We're going to need a bigger Armoury soon to display all of our CCF awards! It seems as though we're constantly reporting on more wins for our accomplished CCF Team.

On the weekend of 20-22 September 2019, eight cadets of Charterhouse CCF participated in the annual 11 Brigade Cadet Skill At Arms Meeting (CADSAAM) competition held at Pirbright Ranges. Over two days, the cadets competed as two four man teams in shoots against 28 other CCF and ACF contingents from the South of England. The team collected both the Gold and Silver Awards in all the competition shoots winning best CCF Team overall.

Special thanks go to all the Officers and NCOs of Charterhouse CCF for their support in training the team for the competition, not least F/Sgt Lay (coach), CQMS Chris Ridgers and Sgt (s) Neil Godden and Vicky Richards without whom the team could not have trained or competed.

The team and staff photograph 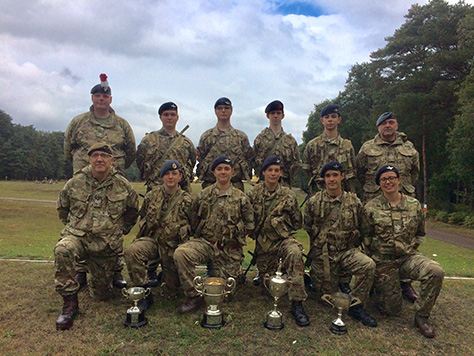