Our Pupils Teach in Township Schools

Charterhouse’s relationship with Mellon is a key plank of the our Partnerships Programme, through which the School seeks to learn from others and to share its own resources. The pupils on this inaugural trip to Cape Town were all First Year Specialists (Year 12), and spent a busy week teaching literacy and science, studying South African history alongside their peers, and engaging with the work of the Lynedoch Sustainability Institute, where the group stayed. 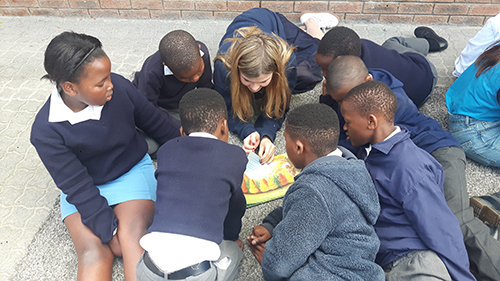 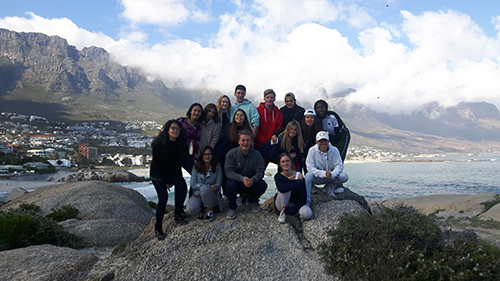 A visit to Camps Bay on the final day

Pupils India and Lisa report on a busy, successful week:

“What did we get up to in our last week of holidays? From 26 August to 3 September, 15 Charterhouse pupils accompanied by 3 teachers flew across the globe to a not-so-sunny South Africa. Upon arrival, we received a warm greeting from the whole Mellon Team, the charity with which we were working, who we grew to love and appreciate over the week. Although sleep deprived and in desperate need of a shower, we made our way straight to Usasazo High School. We received a fun, musical welcome from the children in Grade 11. Waking up at 5am for the next three days didn’t help our tiredness, and the cold winter in South Africa seemed to make it harder to get out of bed, but the look on the children’s faces when we visited primary schools completely made it worth it! We spent time Ummangaliso and Sobambisana Primary Schools and taught them about sustainable, renewable and non-renewable energy. As a surprise, we donated Solar-Powered torches to the schools, so the children could use them during their science classes to further their interests on types of energy sources. We assembled the torches with the South African; their practical abilities were impressive and both the students in Grade 7 and Grade 11 quickly built and loved the torches, and were experimenting with their many uses. With the younger pupils, we did some pair reading, drawing, singing and dancing, bringing back our inner prep-school selves again. By the time Thursday came, we were saying our heart-breaking goodbyes to the children, with whom we had connected and bonded much more intensely than any of us had expected! The gratefulness and openness of these little children took us by surprise, leaving us more emotional than we had anticipated.

"However, we were looking forward to the upcoming days! We went on a trip to Robben Island (the prison Nelson Mandela was held in for eighteen years), accompanied by the interns from the schools we had been in as well as the lovely Mellon Educate team. We spent the day in the footsteps of great leaders, such as Robert Sobukwe and Nelson Mandela, touring the poor conditions these men were kept in for years on end. We were fortunate to be guided by a former Robben Island prisoner who brought his experiences to life and modestly told us he was involved in aiding Nelson Mandela after his freedom from Robben Island on 11February 1990. Reflecting on that ‘Long Walk to Freedom’, we spoke to the interns about their attitude towards Mandela’s conviction and presidency and learnt a lot about how, even almost five years after his death, he is still an important part of South Africa and their image.

"On Saturday, conscious that it was our last full day, we determined to make the most of it and travelled to Table Mountain, seeing the view of the whole of Cape Town (although a little cloudy…!) On Sunday, we spent our day before our flight at the V&A Waterfront, enjoying the good weather, views and some nice restaurants and shops, and attending a service at St George’s Cathedral, site of so many political protests. Eventually, we said our last goodbye to South Africa and the experiences we had had in the past days, and tried to make the best out of the twelve-hour flight back home before going back to school.

"We are immensely grateful for the experiences we have had in South Africa. Going on this short trip but doing something impactful for the lives of others has brought out the best in ourselves. We hope that sharing our knowledge about energy and sustainability has benefited the children that have made us smile! Although our aim was for them to gain something out of this trip, it is safe to say that we as a team have all gained so much from this trip too. It was truly an eye-opening and humbling experience in South Africa for all of us!”

Ben Cahill-Nicholls, the School’s Director of Community & Partnerships, commented, “At Charterhouse, we feel educational partnership has to be genuinely two-way, with both parties learning and gaining from the experience, and with aims and outcomes that are embedded, measurable, and impactful. We have worked hard with Mellon to ensure that pupils from all the schools involved take something from their experience, and to develop a relationship which is sustainable and scalable. It is truly a privilege for all of us at Charterhouse to be involved with Mellon’s amazing work in South Africa – a week we will remember constantly until we next visit!” 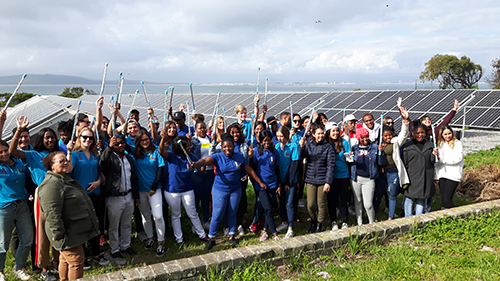 Charterhouse pupils visited Robben Island with interns from Mellon Educate, where they lit the solar torches built during the week, and affirmed their commitment to renewable energy