A brief summary of each match played thus far follows:

After a delayed start due to rain led to a reduced overs match (40 overs per side), Friars scored a monster 261 for 2 from their 40 overs. An innings of professional quality from Olly Batchelor who scored 152 not out, opening the batting. He was well supported by good contributions from Will Melhuish (S17: 42) and James Hamblin (g96) with a rapid-fire 43 not out from just 23 balls, as he and Batchelor (W14) smashed a tiring Hurst Johnians’ attack to all parts in the final 5 overs of the innings. B Canfield figures of 1 for 32 from his 8 overs the best of the bowlers.

Old Hurst Johnians were 92 all out in reply with T Shams top scoring with 32. A very good all round bowling and fielding display from the Friars and in particular from James Hamblin 3 for 14, Tom Gallyer (S12) 3 for 13 and Johnny Gonszer (P12) 2 for 11.

Shrewsbury were bowled out for 90 with A Polloch (31) the only major contribution with the bat. The scoreboard at one point reading 9 for 5 with the top order blown away by opening spells from Tom Gallyer 4 for 20 (from his 10 overs) and Jimmy Hawkings (R17) 2 for 9 (from 5 overs). Also a stand out performance from Jonny Charles (L16) with his off spin taking 3 wickets for just 4 runs from his 8.2 overs. A very professional display in the field from the Friars.

In reply, Charterhouse looked comfortable from the start with Olly Batchelor (W14) scoring a classy 49 and Oli Pike (W08) seeing the Friars over the line with 24 not out.

Charterhouse Friars vs. Old Bedfordians - Friars won by 6 wickets chasing 226, having won the toss and elected to field first.

A superb knock from James Kettleborough for the OBs scoring 143 and almost carrying his bat (out last ball of the innings) supported by T Graham (29) and V Sohail (32). But a great performance in the field from the Friars to restrict OBs to just 226. Wickets from Jimmy Hawkings (R15: 3 for 43 from 10) and Jonny Charles (L16: 2 for 39 from 10). Two terrific catches from Henry Don (R08) one at extra cover and the other at deep backward square leg broke partnerships at crucial times. 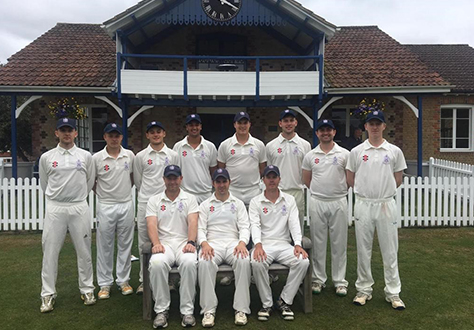 Congratulations to the Friars for getting to the semi finals in the Cricketer Cup. Sadly this is where their journey ended but a valiant effort from our cricketers!