Last year, I had the great pleasure and privilege to go to New York to receive a posthumous honour on behalf of my grandfather Henry Longhurst (G27) at his induction into the World Golf Hall of Fame. He had enjoyed an enviable career as a golfing author, correspondent and TV broadcaster until his death in 1978. 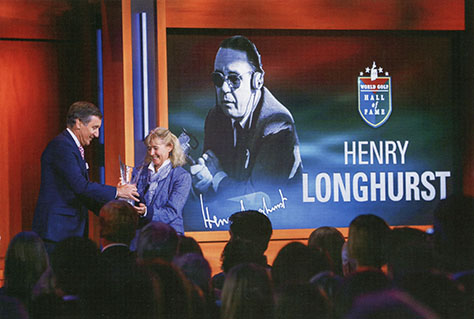 Having captained the Cambridge golf team, he fell into his first journalist position, writing up match reviews in a small magazine before being picked up by the Times Group. He wrote a column in the Sunday Times without fail for 40 years, building himself a reputation as the foremost golf correspondent of the day; an amusing, reliable, articulate voice on all matters golf at family breakfasts throughout the land.

Over the decades, his match reports became life commentaries, full of wry observations but always generous, about the “foibles, failings and inner feelings of golfing characters who are hooked on the original simple thrill of propelling a ball from one hole to another.”

When Henry arrived at Gownboys, as a Classics scholar aged 13, he had just won his first public tournament, curiously beating Laddie Lucas who would later also captain the Cambridge team and the Walker Cup team.

He later wrote: “When the Old Carthusians were winning the Halford Hewitt tournament at Deal with such regularity in the thirties, it was often supposed that golf must have been encouraged at Charterhouse when members of the winning teams were at school there. This, however, was far from the fact. For the first year or two one was not even allowed a bicycle. After that there was the chance only of an occasional game during the latter part of the Easter and summer terms (sorry, “quarters”!), and this only the hard way by bicycling four miles each way to the West Surrey course at Enton”.

He would have been truly delighted to learn that in 1988, one of the holes at the school’s own golf course had been dedicated to him by John Shipton (G50), father of my good friend Bill Shipton (G80). Henry was part of that extended winning streak in the Halford Hewitt tournament and wrote some amusing tales about it in his autobiography, My Life and Soft Times.

Henry’s dearest friend, Peter Wreford-Brown (G27), told of his precocious streak at his memorial service: “Henry was undoubtedly a most tiresome and irritating boy.  Not to his teachers, for he was of course an excellent and diligent scholar.  But to his would be friends and staff.  I have seen him chased round the school cloisters running like a stag, pursued by a huge butler waving a carving knife. Some argument about how to fry eggs; Henry was right as usual, but in a provocative and infuriating manner.”

Having established his career as a writer, Henry found further fame with his voice on TV broadcasts of the Opens and Masters in the era of Palmer, Nicklaus & Player and the like, and was loved both in Britain and America (“the Great Excited States”) for his knowledgeable, pithy commentary, built up from a life’s work gathering stories of legendary achievements of great characters in golfing history.

Peter Wreford-Brown again, telling of their first day at school together, being tested for the choir: “I was selected, but Henry, who made a most fearful groaning noise when called upon to sing – was instantly rejected.  He was in fact tone deaf.  It is an interesting reflection for me that my voice was subsequently to be confined to the barrack square, whereas Henry’s was to become known to millions.” 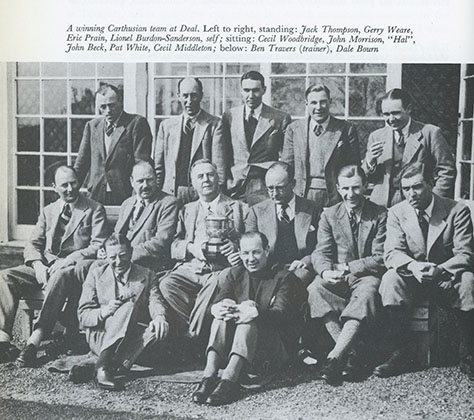 His legendary style of commentary, with his respectful silences and witty remarks, set a high standard for his successors including his partner Peter Alliss.  He could read the players with fine insight and convey their every agony. Everyone seems to remember the classic “Oh!” which perfectly expressed the terrible inevitability of Doug Sanders missing his final putt to win the 1970 Open at St Andrews, as he bent down to move a blade of grass: “Oh Lord…  there but for the grace of God” – one of his favourite expressions.  My own favourite moment was when someone, I can’t remember who, accidently knocked the ball off their tee: “And a whole nation mutters ‘One’”.

At the World Golf Hall of Fame induction ceremony itself, at Cipriani’s in New York, which was the perfect excuse for a large family gathering, we met some of the surviving celebrities from that golden age: a delightful Gary Player, very warm and  gracious in his recognition of Henry’s part in building their reputations and broadcasting their endeavours; Tony Jacklin enjoyed telling us of Henry holding court in bars around the world; Davis Love III, a fellow inductee, was also very generous in his recognition of Henry’s contribution to the global interest in golf, as the voice of pioneering broadcasting.

I am so grateful to sports journalist John Hopkins both for nominating Henry and agreeing to present him at the ceremony and for reintroducing me to my grandfather.  For some reason I found myself the keeper of the tin trunk of his archives in my attic and over a dozen leather-bound albums of press cuttings, devotedly maintained by my grandmother, spanning his 50 year career, which make for fascinating reading.   A selection of his memorabilia is now on temporary display at the WGHF museum in Florida, with a permanent locker assembly as well.  And we are very excited that the museum at St Andrews is also keen to make an exhibition of his wonderful albums and I’ll be heading up there in the summer to donate them.  I hope many old Carthusians will take a moment between rounds to check in on their fellow alumnus and appreciate his life and work. 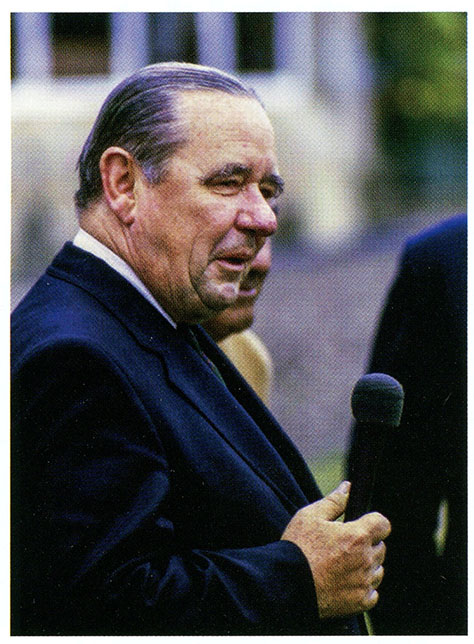 Near the end of his life Henry wrote: “To me, golf has brought a congenial life; a life spent among pleasant people, who have mostly been at their own pleasantest in the circumstances in which I have met them, often in some of the greatest beauty spots in the world.  Now it is time to lay down my pen and alas, the microphone too, and to reflect, in whatever time may be left, how uncommonly lucky I have been.  And if I have managed to give a little pleasure on the way, well, what a happy thought that is, too.”

Henry Longhurst did indeed bring pleasure to many thousands and has now, rightly, been afforded the honour of a place in the World Golf Hall of Fame.

Read an extract from “My Life and Soft Times”, Henry Longhurst, written in 1971 on his recollections of the Halford Hewitt tournament in which he played for 12 years.