Former pupil Freddie Winter (G 2008), is celebrating having recently won Gold in the Slalom at the Waterski World Championships held in the Paris venue of Choisy-le-Roi between 3 to 10 September. Freddie had to beat three former world champions with an aggregate six world crowns between them, in the biennial tournament, stretching back to 2005, to take the gold medal. It was a convincing performance as he was the only skier to achieve the 10:25 metre line length.

Freddie has had a hard road back from injury which has seen weeks during the summer when he was unable to train and suffered muscle wastage through keeping his ankle in an air boot.

Ranked number 1 in the world based on pre-injury performances last year, Freddie has been down the performance league this summer and managed only a handful of tournaments. He always knew this would be the opportunity to validate his season and in the end, did so in style!

Freddie's path to glory started at JB Ski in Chertsey, often in freezing wintery conditions. Then family holidays in Greece, school studies at Charterhouse and university at Royal Holloway, all contributed to his recent success, as he trained under coach and world silver and bronze medallist, John Battleday. A waterski scholarship to study an MBA at the University of Louisiana at Monroe saw Freddie continue to pursue the dream of standing on the podium as World Champion.

Since leaving University in Louisiana, Freddie has based himself in Orlando, Florida, the world waterski capital. But on the day in question, it was chilly British type conditions that were the backdrop for Freddie's big day. He commented post-race:  "this was a tough site and coach Steve Glanfield has been roughing up the water, pre ski, in my last fortnights’ skiing at Oxford Waterski Club to simulate the conditions. I owe a lot of people a lot to have got there today”.

We wish Freddie our sincere congratulations on such a fantastic achievement. 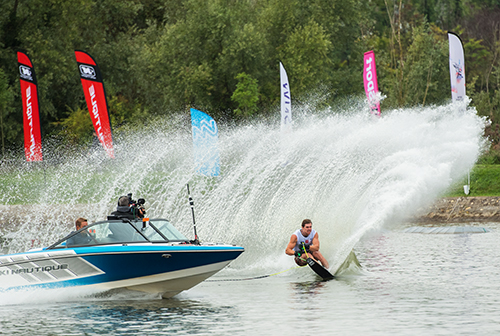