In hockey, the Boys' 1st XI have won the England Hockey Tier 2 National Championship Final beating Bedford on penalty strokes in a very tight match at the Lee Valley National Hockey Centre on Thursday 2 May.

They reached the final having defeated Merchant Taylors' 3-0 in the semi-final – the side they lost to last in year’s final. Goals came from Raph Boulanger, Sam Duffen, and Freddy Clinton.

The final itself ended 1-1 at full time. It and was a fantastic match, if at times a little nail biting, with an excellent goal from Raph Boulanger in the first half, and brilliant goalkeeping from Elliot Clarke throughout but especially in the final two minutes where two penalty corners and a penalty stroke were kept out to take the game to penalty strokes.

Here, Charterhouse held their nerve, as they had done against Tonbridge in the quarter final, winning 4-2. All four Charterhouse stroke takers were successful (Boulanger, Max Say, Will Briggs, Ross Fordham) with Clarke making a fine final save to seal the victory.

Many congratulations to the entire squad and coaching staff for such a fantastic achievement. 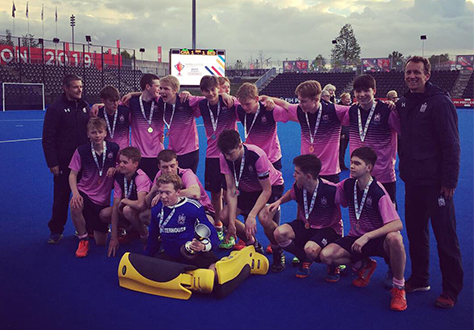