Having won the England Hockey National Championship in May 2019, the Charterhouse Boys 1st XI Hockey were recently nominated for the Active Surrey Sport Godalming Youth Team of the Year Award 2019, and came first in a strong pool of youth sports teams in the South West region of Surrey.

The awards ceremony took place at the Wilfrid Noyce Centre in Godalming on Friday 8 November where the team were presented with the Go Godalming Shield and 1st place trophy by World Record English Channel Swimmer, Tom Gregory, who was also the Guest Speaker for the evening.

The Active Partnership for Surrey, also known as 'Active Surrey' was set up in 1999 by Sport England and local partners as a not for-profit organisation, hosted by Surrey County Council. Active Surrey and partners play a crucial role in blending Government strategic, health and economic-related objectives with the needs of local people.

Amongst its many initiatives, Active Surrey support local sports councils in hosting annual sports awards. The awards recognise the efforts and achievements of clubs, teams, volunteers, coaches and individuals in a range of sport-related activities.

The Charterhouse Boys U18 were recognised for their progress and achievement in the youth team category in Godalming and surrounding boroughs. More than 130 nominations were submitted for the awards, for which the youth team award was one of the most crowded.

Very well done to all involved. 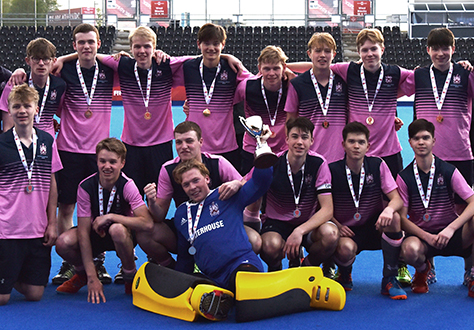