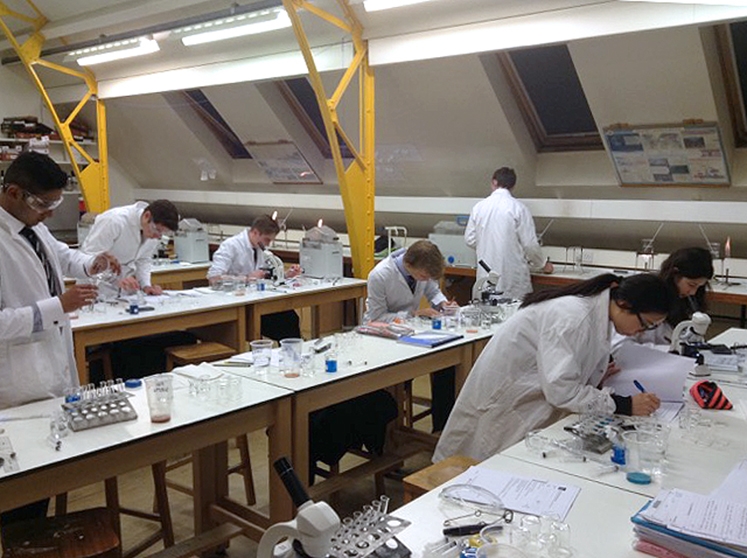 The Biology Department at Charterhouse seeks to inspire and support pupils in all aspects of this diverse subject, whether for its relevance to every day life, for pure scientific curiosity or for the pursuit of careers such as medicine or research.

Charterhouse has a strong tradition for Biology. Our laboratories are adorned with historic specimens, such as a duck billed platypus, a narwhale tusk and a mammoth’s tooth. The labs are equipped with the most modern microscopes and electrophoresis equipment, and they are supported with a team of three expert technicians. Our philosophy is to deliver a curriculum that is enriched with the many aspects of the subject that are relevant to life and to society. Teaching is delivered through a rigorously scientific and practical approach that seeks to inspire young biologists.

All pupils study Biology to IGCSE and Biology is a very popular choice for Specialists, being studied by a quarter to one third of all sixth form pupils.  Many go onto study Biology at internationally renowned courses in the UK or abroad or related courses such as Medicine or Biomedical Sciences. We have a thriving Medics Society, Perception Society (neuroscience and psychology) and a Natural History Society.

Full details of the curriculum are available in the Under School (Years 9-11) Curriculum and Sixth Form Curriculum sections.

Our seven teaching staff have deep expertise in a variety of aspects of the subject from Cell & Molecular Biology, Biochemistry, Medicine/dentistry, Gene technology and Marine Biology.

Mr Bagley studied cell and molecular biology at the Zoology department in Cambridge. Mr Bagley joined Charterhouse from RGS Guildford having previously had a career in the city. He is a keen naturalist, sailor and hill walker.

Dr Balasubramanian completed his PhD at the University of Nottingham where he subsequently worked as a lecturer and postdoctoral scientist. His has expertise in molecular biology, biotechnology and genetic engineering and takes special interest in psychology and neuroscience. He worked in the City for the global financial services firm, Ernst & Young LLP prior to joining Charterhouse as teacher of Biology and Assistant Master of Scholars. Some of his favourite pastimes include reading an immersive book, a good game of cricket or listening to soothing classical music.

Mr Coopper studied Biological Sciences at the University of Warwick specialising in Ecology and Environmental Sciences, where he also completed his PGCE. He joined Charterhouse from Gordon’s School in Woking. He is heavily involved in the CCF running the School’s Army section, as well as being a keen sportsman, coaching hockey and cricket.

Mr Dagnall was educated at Winchester College before attending the University of Oxford to gain both his BA in Cells and Systems Biology and his MSc in Pharmacology. He joined the School after completing his PGCE at King’s College, London. Mr Dagnall enjoys football, hockey, real tennis, scuba diving, running and chess.

Mrs Lambeth joined Charterhouse in 2019 after 8 years at Bede’s Senior School where she taught Biology, Science and PE, and was also a Housemistress.  Prior to her time at Bede's, Mrs Lambeth was Head of Year 7 & Head of Year 10 (concurrently) at Wisewood School and Community Sports College, and prior to that, taught at Felsted School. As well as teaching Biology and Chemistry, Mrs Lambeth is also Senior Housemistress and Housemistress of Sutton.

Ms Waters grew up in Dorridge and attended King’s High School for Girls in Warwick before going up to Durham University where she gained her Biology degree. She went on to earn her PGCE in Secondary Science at Warwick University. She joined Charterhouse from Holland Park School where she taught for six years. Ms Waters is interested in skiing, scuba diving, fell walking and water sports.

Dr Warren joined Charterhouse in 2019 from Compass International School in Doha, Qatar where he taught Biology and Chemistry, was the Duke of Edinburgh's Award Coordinator and was the Phase Leader with pastoral responsibility for Years 7, 8 & 9.  He was educated at Sherborne before reading Veterinary Medicine at Girton College, Cambridge where he was also a choral scholar, a lacrosse half blue and an Officer in the TA. He practiced as a vet in Hong Kong, Dubai, Abu Dhabi and Doha, then spent eight years in banking in Doha before completing his PGCE in 2015. In his spare time, Dr Warren volunteers as a Scout Leader.