Chemistry is an extremely successful subject at Charterhouse. 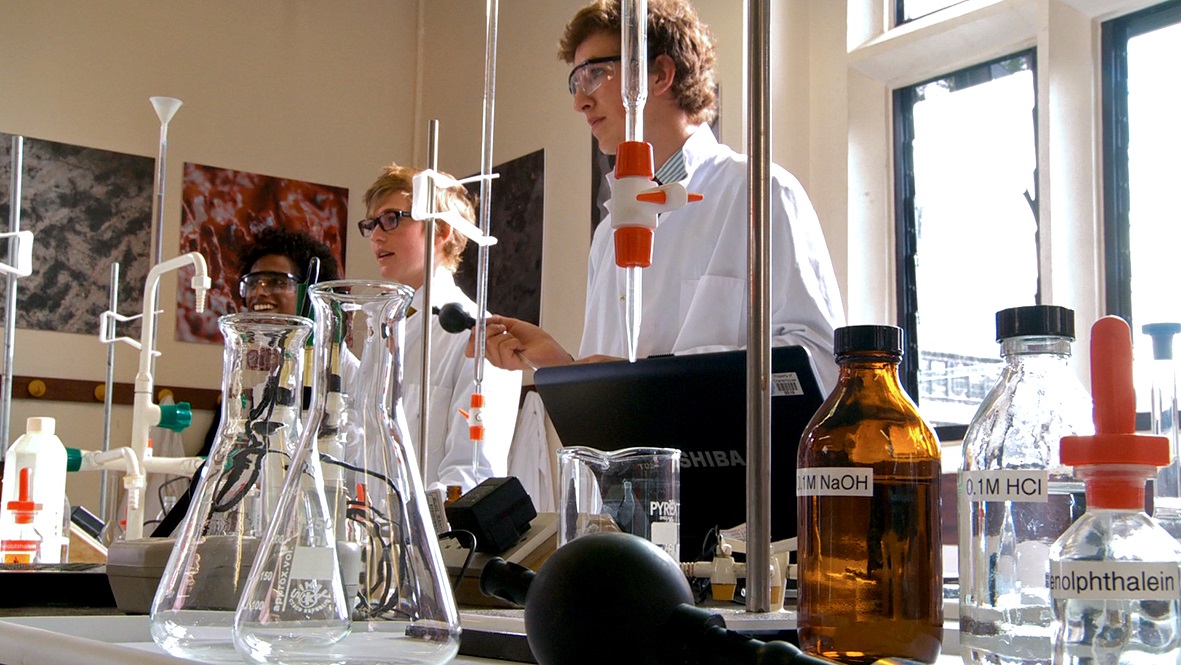 Chemistry at Charterhouse has a rich history and the department can boast the discoverer of two elements (Pd, Rh) amongst its Old Carthusians. The department at present is staffed by a well-qualified team of subject specialists several of whom have taught Chemistry at a university level. The labs are well stocked with modern laboratory equipment including UV-Vis spectrometers and a diamond IR-spectrometer.

Chemistry is a core compulsory subject in the Under School and a popular choice for pupils in the Specialists, over a  quarter of pupils in the Sixth Form choose to study Chemistry beyond GCSE level. Each year many pupils go on to read Chemistry or a related subject, such as Natural Sciences or Medicine, at university.

In the Under School, years 9-11, pupils study the Edexcel iGCSE Chemistry syllabus, this provides a very strong foundation for continuing with Chemistry into the sixth form. In the Specialists, years 12-13, Chemistry is offered in the form of the CIE Pre-U or as part of the International Baccalaureate. Both courses cover Chemistry in an academically rigorous manner and provide pupils with an excellent foundation for higher level study. The department offers pupils the chance to enhance their knowledge outside the standard syllabus with numerous national competitions such as RSC Chemistry Olympiad and regular lectures from prestigious speakers such as Peter Atkins and Peter Wothers.

Full details of the curriculum are available in the Under School (Years 9-11) Curriculum and Sixth Form Curriculum sections.

Mr Hingston joins Charterhouse from Merchant Taylors’ School where he taught for eight years and where he held the post of Head of Chemistry for four years. He was educated in Cardiff at Rumney High School followed by Saint David’s Sixth Form College, before studying Chemistry at Lady Margaret Hall, Oxford. Mr Hingston is a keen hockey player and also enjoys golf, skiing and walking.

Mr Morgan is a teacher with twenty-two years’ experience teaching Chemistry, formerly at Wisbech Grammar School where he was the Head of Chemistry.  After gaining a BSc in Biochemistry at University College Swansea, Mr Morgan worked as a process manager at ICI Chemicals and Polymers. He started teaching after he took a PGCE at the University of Worcester. His interests include running, cycling, tennis, squash, reading and travel.

After being awarded the Rex Whinfield Prize for obtaining the top First Class Honours at the University of York, Mr Johnson then took up his life-long passion to become a teacher and joined Charterhouse in 1989. Since then he has fully embraced the life of a boarding school teacher running a variety of co-curricular activities, though focussing mainly on the sporting and outward bound areas, and in the interim has also run the Chemistry Department for five years. He is Racquets, Master of Examinations and is a tutor in Weekites.

Mr Kane joined Charterhouse in 2019 from Wimbledon High School, where he taught Chemistry for three years, and was also the Head of Houses. Educated at Charterhouse (g11), he then read Chemistry at the University of Durham, and completed his PGCE at Magdalene College, Cambridge. Mr Kane is an enthusiastic sportsman, particularly in cricket, hockey, and fives, and enjoys musicals, baking, and reading. As well as teaching Chemistry, Mr Kane is also the Assistant Housemaster of Weekites.

Mrs Lambeth joined Charterhouse in 2019 after eight years at Bede’s Senior School where she taught Biology, Science and PE, and was also a Housemistress.  Prior to her time at Bede's, Mrs Lambeth was Head of Year 7 & Head of Year 10 (concurrently) at Wisewood School and Community Sports College, and prior to that, taught at Felsted School. As well as teaching Biology and Chemistry, Mrs Lambeth is also Senior Housemistress and Housemistress of Sutton.

Dr Snell joined Charterhouse in 2013 following the completion of his post-doctoral research at the University of Cambridge. Dr Snell specialises in organic chemistry, in particular the synthesis of natural products, he holds a doctorate from the University of Oxford (Brasenose College). Dr Snell completed his undergraduate studies at the universities of Exeter and Bath and has worked in numerous academic and industrial labs across the UK and in Singapore. Outside of the classroom he has an active interest in cycling, rock climbing, martial arts and is involved with the CCF (army), Judo and hockey within the School. He is a House Tutor in Lockites.

Miss Tod studied Chemistry at Oxford University specialising in Physical Chemistry. After work as a business consultant she undertook teacher training at the Institute of Education in London. Her first teaching post was at Highgate school in North London, before she moved to Charterhouse in 2011. Miss Tod is also Warden of Chetwynd, the main girls' Hall of Residence, and was previously Master of the Specialists (Sixth Form). Outside of the classroom she is a keen sailor and is the Master in Charge of sailing at the School.