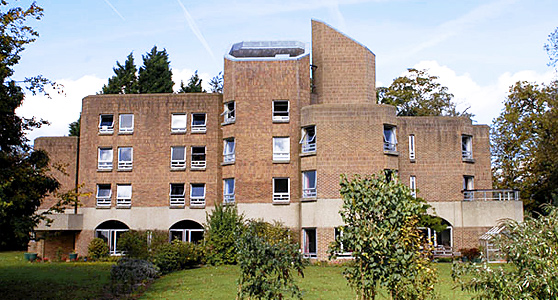 The House was named after its founding Housemaster, the Revd Gerald Davies. The original Daviesites was located in Farncombe, opening in May 1874 with just six boys, but it moved in 1875 to a building on the highest point of Frith Hill, overlooking Girdlestoneites. The house was bought by the School in 1905, when Daviesite pupil numbers were increased from 25 to 40. In November 1973 Daviesites was the first House to move into one of the seven ‘New Houses’ designed by Richard Gilbert Scott, the son of Sir Giles Gilbert Scott, architect of the Memorial Chapel. The accommodation allows nearly every boy to have his own study-bedroom throughout his time at Charterhouse. The Central Dining Room, Queen's Sports Centre, golf course and playing fields are within easy reach.

As Housemaster it is my aim that every Daviesite should possess a strong sense of integrity, and consideration for others, who instinctively volunteer their services when required and take ownership of their mistakes when they inevitably occur.

Daviesites are famed for their energy, enthusiasm and competitive spirit, buoyed by the enormous sense of pride the boys have for their house. Applying the very best attitude and team approach is the most important aspect of competition in Daviesites, rather than simply focusing on the end result. That said, it is no surprise that getting the former aspect right has led to a great deal of recent success in the latter.

In Daviesites, preparation for success in the world beyond Charterhouse is as important as delivering success within it. As such the boys are encouraged to be the masters of their own destiny, they are afforded a degree of ownership in house decision making and are entrusted to take the lead on running house events, projects and some financial matters, even if that means a few mistakes are made along the way. One of our central aims is to ensure that the boys are familiar and comfortable with responsibility and leadership throughout their time here. We hope to develop young men who are at ease and confident when working independently if the situation calls for it but who are at their very best when working in collaboration with others. Cooperation and integration throughout the House is therefore key and to that end we put aside the natural boundaries created by year groups and the limitations they can impose. The older boys are seen as mentors to the younger housemates rather than their seniors, the house a band of brothers rather than a hierarchy.

Parents, guardians and relations are as much part of the Daviesite family as the rest of us. Please support matches, attend concerts and watch plays and feel free to call in for a coffee and chat whenever you are at School.

Sam James joined Charterhouse in September 2010, following three years in Investment Management and having previously served as an officer in the Royal Air Force. He is a graduate of the University of St Andrews, where he achieved an MA in Management. Sam teaches Economics and has held a range of responsibilities before taking over Daviesites in September 2019, including five years as Assistant Housemaster in Lockites and Head of the Removes and Fifths. Sam has played hockey and cricket throughout his life, is a slave to the golf course, regularly runs, swims and cycles, with another marathon and a half-ironman in the crosshairs. At Charterhouse he has coached the 2nd XI teams in football, hockey and cricket. Sam also runs the Charterhouse Farm.

“Daviesites is a loving and sharing house; the people of the House are always willing to help others when their support is needed, they are kind and helpful and they are ready to fight for Daviesites in any sort of competition (from water polo to chess) no matter what. In addition to all that, Daviesites seems to be one big family. When I look at other Houses I feel none of them can quite match us for family spirit. It makes me feel proud to be a Daviesite.” (Year 11 Pupil)

“Daviesites is the most inclusive House and the atmosphere is very natural. The boys in each of the years are welcoming and friendly which makes it very easy for everyone to settle in. The studies and common rooms used by the students make it easy to bond with everyone from the outset; not to mention the different opportunities we have to wind down after studying hard during the week. Daviesites is a House where all feel settled and at home in an environment where people get involved in different activities and enjoy themselves.” (Year 12 Pupil)

“In terms of location you could not ask for anything more. Daviesites is fittingly ‘an anchor’ House, arguably being the best situated House in the School. It sits just a cricket pitch away from the picturesque towered buildings of the main School; gifting us with stunning views. It is located next to the BTT (Ben Travis Theatre) with its garden backing onto the football pitches.

Although we are so closely located next to the football pitches, we do not have a shining cabinet of sporting trophies to boast. Wherever we do place in House competitions, our House spirit wins through every match. We are gifted with plenty of support inside House too, ranging from a sound group of tutors to pupils that live amongst us in the House; encouraging each other on the playing field or in the classroom is something that we hold very important as Daviesites.

Personally, however, the most valuable part of being a Daviesites is the sense of ‘togetherness’ as much as our successes as a House. I have made friendships with the people I live with that I know I will hold dear all my life. So, when I leave Charterhouse at the end of my specialist years, I look forward to celebrating future successes together as we move onto university, careers and adult life.” (Year 13 pupil)

“Pupils contribute exceptionally well to their boarding houses and to the School. They actively support one another, recognising individual differences and needs. Older pupils take on leadership conscientiously, contributing to their preparation for later life as responsible citizens. Senior pupils take on roles as peer mentors in their House, and support younger pupils extremely well in their duties.” (Independent Schools Inspectorate)